“When you know, when it has a name, even if it doesn’t have a cure, you can find a new family” 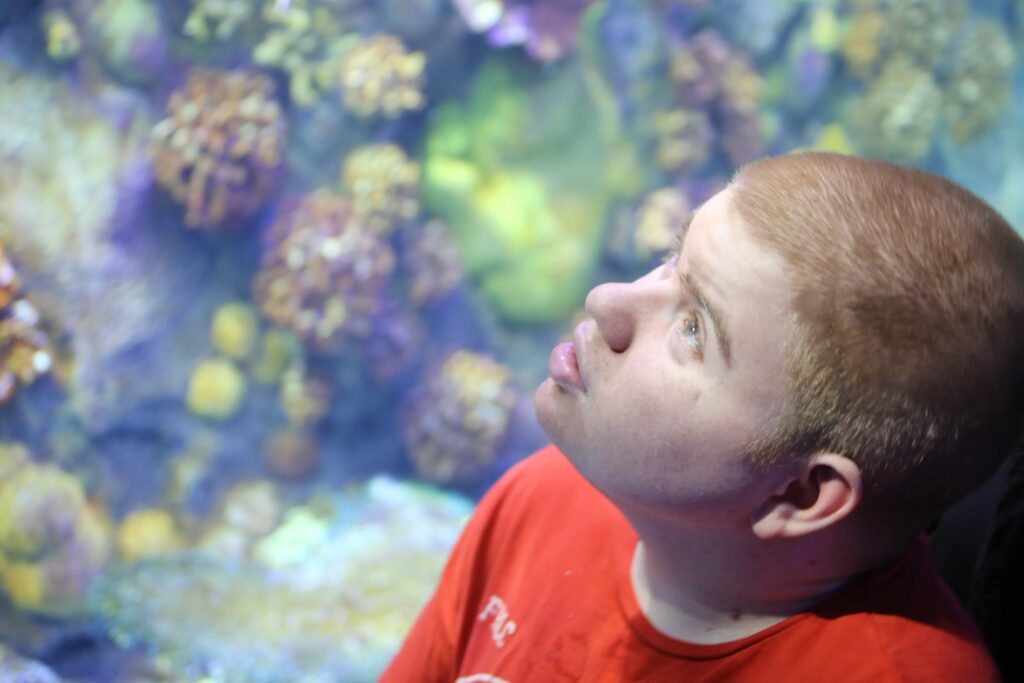 Now a young adult, it took 10 years for Bug to be diagnosed, when a simple photo in Face2Gene could have pointed  his doctor  to the right diagnosis

When Glenn “Bug” Maughan was diagnosed with KBG Syndrome in 2015 at the age of 12, that diagnosis was one answer to so many questions his parents, Annette and Glenn, had been asking for years: Why is he having so many seizures? Why is his gait so unusual? Can he hear us? Why did he start to lose some of the early skills he had gained already?

“Early diagnosis would have helped us so much,” Bug’s mother, Annette Maughan, says.

Bug, now a loving young man with three younger siblings who continues to make progress, had his first seizure at age 3, followed by another one four months later. It was the beginning of countless seizures that would occur in the years to come.

“When he was younger, we were so focused on epilepsy,” Annette says. Another doctor added autism to Bug’s diagnoses when he was about 5. Yet, Bug’s parents knew there was something else to uncover.

“In fact, when we saw a geneticist, he said Bug had physical markers of having a genetic anomaly, but he didn’t look like it since he looked like his dad,” she recalls, mostly because both of them had golden-red hair. It would be several more years before they could convince a doctor to order a whole exome sequence (WES).

Through the WES, they finally got their answer: KBG Syndrome, one so rare, there were only about 60 known cases at the time. The syndrome is caused by a mutation of the ANKRD11 gene and is associated with a spectrum of challenges, including developmental delays, cognitive disabilities, behavioural disorders, autism, seizures, hearing loss, skeletal anomalies, heart complications and gastrointestinal problems.

“If doctors had a non-evasive tool to help them look earlier, so much would have been different”, Annette says. If a doctor back then could have simply uploaded a photo of young Bug and matched his facial features against phenotypic data for rare diseases, the Maughans would likely have known much sooner what kinds of challenges he would potentially face in the future.

“We would have kept an eye on his ears. He had so many ear infections, but we didn’t know it because of his high pain threshold,” Annette says. “ We would have watched for tethered cord. After he had surgery to release his tethered cord, it changed his life completely.”

“Early diagnosis can change lives,” Annette says, “not just the outcomes for the patient, but the outlook of the patient’s loved ones.”

“When we didn’t have a diagnosis, we felt so isolated,” Annette says. “When you have a child that is different and you don’t have answers to give, and people look at you to ask more questions, all you can say is ‘We don’t know.’ And then they leave.”

When people know what they’re dealing with, they can find others in similar situations. If there’s a syndrome, there’s probably a patient support group or organization. For Annette and Glenn, there was no KBG Syndrome organization when Bug was diagnosed, so they were the ones to start the KBG Foundation, a 501(c)(3) organization devoted to driving awareness and research, as well as providing education and support for families. The Foundation has a closed Facebook group for patients and their families to share their experiences and support one another. Within two weeks of starting the group, Annette received her first message from another parent. Within a year, she says, the group was able to confirm at least 70 more families with a member with a KBG diagnosis. Today, that Facebook group of patients and family members is more than 1,700 people strong.

“When you know, when it has a name, even if it doesn’t have a cure, you can find a new family,” Annette says. “And that helps you find a home.”

About the KBG FoundationThe KBG Foundation is a 501(c)(3) nonprofit organization, dedicated to providing support, assisting in research programs and advocating to raise awareness about KBG Syndrome.

About KBG SyndromeKBG Syndrome is a rare genetic disorder caused by a mutation on the ANKRD11 gene, associated with a spectrum of challenges, including developmental delays, cognitive disabilities, behavioral disorders, autism, seizures, hearing loss, skeletal anomalies, heart complications and gastrointestinal problems. Most people with KBG share at least some physical traits, including a triangular face, heavy eyebrows, curved fingers and spine, and short stature

A mother’s heart knows: Nicolas’ ten-year journey to a diagnosis

For ten years Maria Rayane knew something was not right with her son Nicolas. She was told by different specialists Read more

A Diagnostic Odyssey: It took almost 10 years for Glenn “Bug” Maughan’s family to find out he had KBG Syndrome

“When you know, when it has a name, even if it doesn’t have a cure, you can find a new Read more

This website uses cookies to improve your experience while you navigate through the website. Out of these, the cookies that are categorized as necessary are stored on your browser as they are essential for the working of basic functionalities of the website. We also use third-party cookies that help us analyze and understand how you use this website. These cookies will be stored in your browser only with your consent. You also have the option to opt-out of these cookies. But opting out of some of these cookies may affect your browsing experience.
Necessary Always Enabled
Necessary cookies are absolutely essential for the website to function properly. These cookies ensure basic functionalities and security features of the website, anonymously.
Functional
Functional cookies help to perform certain functionalities like sharing the content of the website on social media platforms, collect feedbacks, and other third-party features.
Performance
Performance cookies are used to understand and analyze the key performance indexes of the website which helps in delivering a better user experience for the visitors.
Analytics
Analytical cookies are used to understand how visitors interact with the website. These cookies help provide information on metrics the number of visitors, bounce rate, traffic source, etc.
Advertisement
Advertisement cookies are used to provide visitors with relevant ads and marketing campaigns. These cookies track visitors across websites and collect information to provide customized ads.
Others
Other uncategorized cookies are those that are being analyzed and have not been classified into a category as yet.
SAVE & ACCEPT