For ten years Maria Rayane knew something was not right with her son Nicolas. She was told by different specialists that his developmental delay was caused by birth complications and as such, made her feel guilty for a long time. Yet deep down, she had a feeling the specialists were wrong.

The years passed by and no one was able to offer any further explanation until she met a geneticist from Curitiba, Brazil, Dr. Carlos Magno Leprevost. Using Face2Gene, he started to investigate the possibility of a rare genetic syndrome and he did find the diagnosis Nicolas so needed.

Maria Rayane lives in the south of Brazil. Nicolas was her first pregnancy, at the age 17 with normal gestation. However, the delivery was complicated – what was supposed to be a normal birth procedure ended up as a c-section. Doctors were concerned with the time it was taking for her contractions to increase and feared that lack of oxygen might lead to fetal distress. 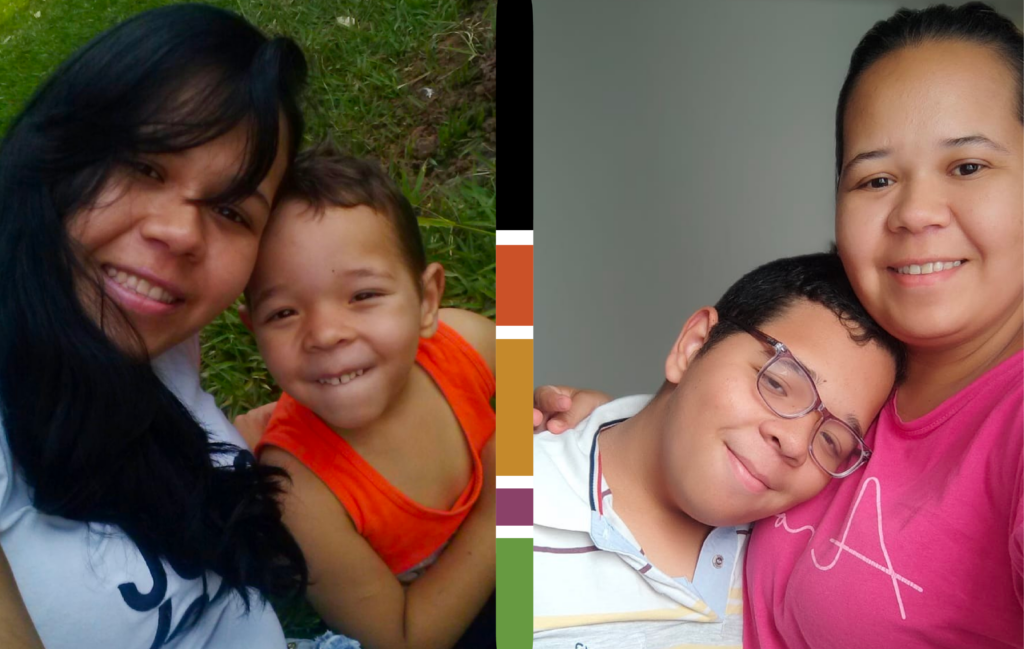 Rayane and Nicolas at 2-years-old, when he manifested the first symptoms (left) and now (right) when he received a diagnosis for a rare genetic syndrome.

“He was born a healthy baby, doctors said he didn’t suffer during birth. Two days later we were home already, but he couldn’t breastfeed properly and was losing weight”, says Rayane. She used baby formula instead which helped Nicolas to gain weight as a normal healthy baby should.

However, Maria Rayane noticed that Nicolas took longer than usual to develop – he started walking at the age of two, and needed assistance to do it. It took even longer to utter his first words. When he was 3-years-old he still couldn’t pronounce a word. But when she questioned the pediatrician, he said that it was all normal. He recommended sending him to school so he would have contact with other children and this would help his development. “When he was 4- years-old it became clear that he had a developmental delay, as teachers would approach me to say that it was not normal for a child of his age to not be able to speak, eat by himself and recognize colors or animals”.

Rayane was then referred to the first specialist, a neuropediatrician who diagnosed Nicolas with cerebral palsy that caused a speech delay. The treatment prescribed was physiotherapy sessions to stimulate his speech.

“I went to a lot of different doctors and specialists, and they kept telling me that he suffered from mental delay probably caused during birth. But I always saw some physical things in him that were different than in other children and reported those to the specialists. For instance his chest has a different shape, his ears, one is larger than the other. His vision caused problems with balance. His fingers are misshaped. However, the doctors would dismiss these, saying that it was not relevant to his diagnosis”.

Rayane went to many doctors until one, a neuropediatrician, took all these issues into consideration and referred her to a geneticist. Nicolas was 10-years-old by then.

(Cornelia de Lange) and RPS6KA3 (Coffin Lowry (X-linked)).To make sure that one of these variants is indeed the one causing Nicolas’ developmental delay,  Dr. Carlos ordered genetic  sequencing also for Rayane, and was able to confirm that only Nicolas carries that mutation. This enabled Dr. Carlos to diagnose Nicolas with Coffin Lowry Syndrome, just as Face2Gene had pointed out.

Following this diagnosis, the RPS6KA3 variant was reclassified from VUS to pathogenic.

Rayane felt very relieved with the diagnosis. “I had been to pediatricians who told me that what my son was experiencing was normal. And then I had gone to specialists that would also tell me everything was normal. Again and again. And at some point, you start to doubt yourself. But I had to find out what was happening to my son, so I just kept looking”.

And now that she has a diagnosis for him?

“We have an expression in Brazil that states that a mother’s heart knows best, and right now my heart is at peace. Dr. Carlos explained to me that what Nicolas has does not have a cure, but we can study other similar cases to learn how to improve his quality of life. That is what I really wanted all along, and right now I can focus only on this instead of trying to find out what he has”.

A mother’s heart knows: Nicolas’ ten-year journey to a diagnosis

For ten years Maria Rayane knew something was not right with her son Nicolas. She was told by different specialists Read more

A Diagnostic Odyssey: It took almost 10 years for Glenn “Bug” Maughan’s family to find out he had KBG Syndrome

“When you know, when it has a name, even if it doesn’t have a cure, you can find a new Read more

This website uses cookies to improve your experience while you navigate through the website. Out of these, the cookies that are categorized as necessary are stored on your browser as they are essential for the working of basic functionalities of the website. We also use third-party cookies that help us analyze and understand how you use this website. These cookies will be stored in your browser only with your consent. You also have the option to opt-out of these cookies. But opting out of some of these cookies may affect your browsing experience.
Necessary Always Enabled
Necessary cookies are absolutely essential for the website to function properly. These cookies ensure basic functionalities and security features of the website, anonymously.
Functional
Functional cookies help to perform certain functionalities like sharing the content of the website on social media platforms, collect feedbacks, and other third-party features.
Performance
Performance cookies are used to understand and analyze the key performance indexes of the website which helps in delivering a better user experience for the visitors.
Analytics
Analytical cookies are used to understand how visitors interact with the website. These cookies help provide information on metrics the number of visitors, bounce rate, traffic source, etc.
Advertisement
Advertisement cookies are used to provide visitors with relevant ads and marketing campaigns. These cookies track visitors across websites and collect information to provide customized ads.
Others
Other uncategorized cookies are those that are being analyzed and have not been classified into a category as yet.
SAVE & ACCEPT